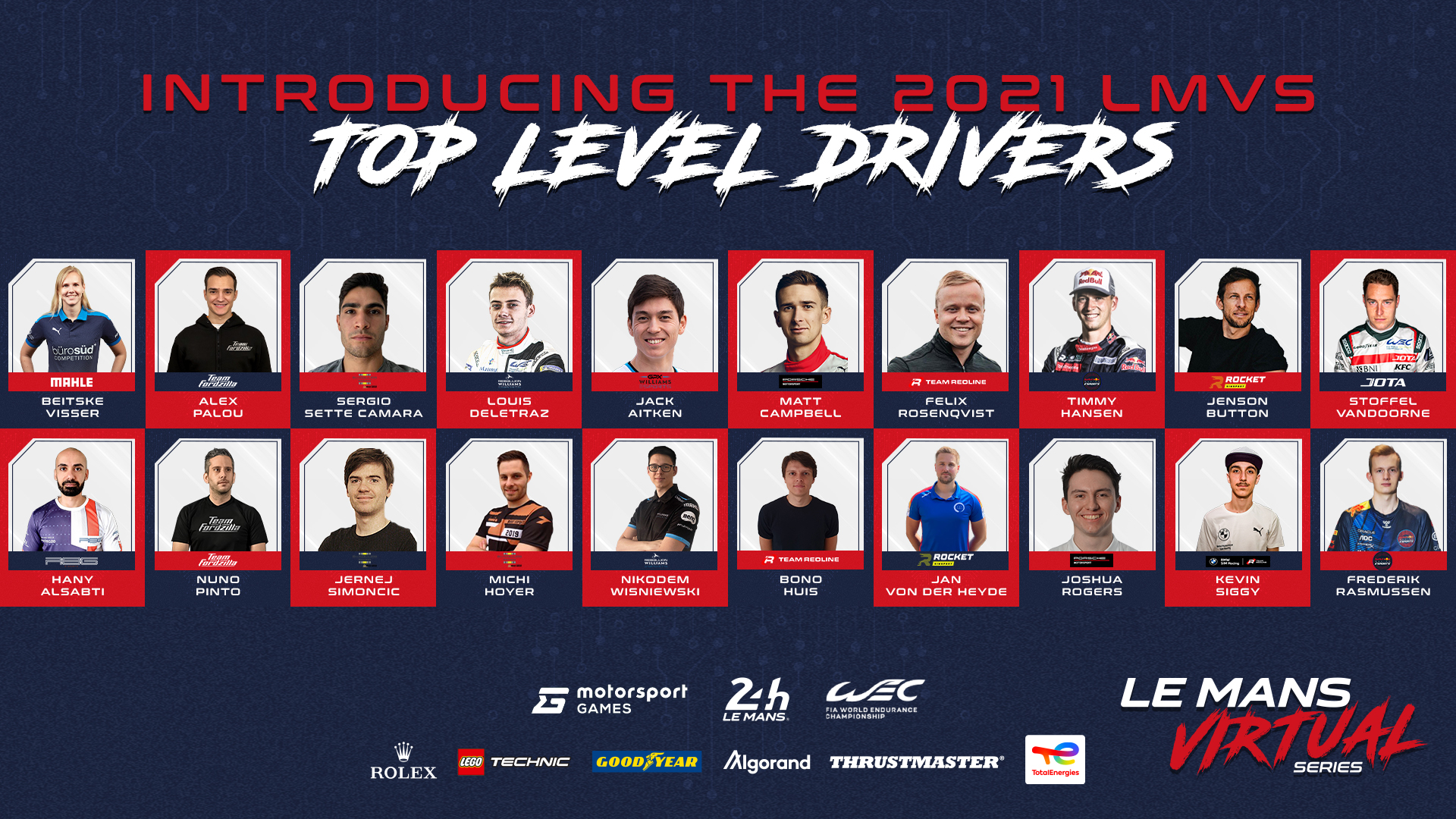 The Le Mans Virtual Series’ driver roster also contains some of the most exciting up and coming young professional drivers, including F2 and F3 stars Liam Lawson, Bent Viscaal, Victor Martins and Caio Collet, as well as female driver Beitske Visser, who races in the W Series and the WEC. The FIA WEC, 24 Hours of Le Mans and IMSA are represented by former champion Bruno Senna, plus former F1 stars Stoffel Vandoorne, Harry Tincknell, Will Stevens, Matt Campbell, Yifei Ye and many other prominent racers.

Demonstrating his racing versatility, Timmy Hansen - World Rallycross and Extreme E driver, will race alongside winners from Japan’s Super GT, the Super Formula championships and GT racers from all around the world. Rounding out the list of professional racing drivers is last year’s 24 Hours of Le Mans Virtual winning line-up, who are reuniting for the Rebellion GPX Williams team to defend their title. Teams making up the rest of the grid include Team Fordzilla, Red Bull Racing Esports, Team Redline, Panis Racing, Team Project 1 and Team WRT, among others, plus championship and Le Mans-winning worldwide brands, such as Alpine, Ferrari, Porsche and BMW, just to name a few.

Joining this roster of esteemed professional racing drivers are elite competitors from the sim racing scene, including popular names such as Michi Hoyer, Bono Huis, Jan von der Heyde, Joshua Rogers and Kevin Siggy. There will be 98 sim drivers within the full 177 driver roster.

An overview of the driver roster construction and format is as follows:

Given the ongoing calendar uncertainty in real world racing, there is provision within the regulations to allow for the replacement of FIA-graded drivers if the originally nominated drivers are not available.

Le Mans Virtual Series is a global, elite esports series made up of 5 rounds which bring together endurance racing and sim racing’s top teams to compete on some of the world’s most famous racetracks. International FIA-licensed real-world drivers are teamed up with leading esports protagonists to take on endurance classics for a total prize fund of US$250,000, culminating in the prestigious 24 Hours of Le Mans Virtual which will take place live and televised at the Autosport Show International at the Birmingham, UK. The Le Mans Virtual Series is a joint venture between leading racing game developer, publisher and esports ecosystem provider of official motorsport racing series throughout the world, Motorsport Games, and the Automobile Club de l’Ouest (“ACO”) - the creator and organizer of the world-famous 24 Hours of Le Mans and promoter of the FIA World Endurance Championship (FIA WEC).

Motorsport Games, a Motorsport Network company, combines innovative and engaging video games with exciting esports competitions and content for racing fans and gamers around the globe. The Company is the officially licensed video game developer and publisher for iconic motorsport racing series including NASCAR, INDYCAR, 24 Hours of Le Mans and the British Touring Car Championship (“BTCC”). Motorsport Games is an award-winning esports partner of choice for 24 Hours of Le Mans, Formula E, BTCC, the FIA World Rallycross Championship and the eNASCAR Heat Pro League, among others.

Investors and others should note that we announce material financial information to our investors using our investor relations website (ir.motorsportgames.com), SEC filings, press releases, public conference calls and webcasts. We use these channels, as well as social media and blogs, to communicate with our investors and the public about our company and our products. It is possible that the information we post on our websites, social media and blogs could be deemed to be material information. Therefore, we encourage investors, the media and others interested in our company to review the information we post on the websites, social media channels and blogs, including the following (which list we will update from time to time on our investor relations website):

The contents of these websites and social media channels are not part of, nor will they be incorporated by reference into, this press release.

A photo accompanying this announcement is available at https://www.globenewswire.com/NewsRoom/AttachmentNg/8af81310-3d49-4dfe-9a0d-f06246f8719a